Before anything, I’m a realist.

Unfortunately, it’s also real that we live in America: full of white voters, white politicians, and white police officers that all combine to form the lovely system that we have today. This system perpetuates white supremacy, even though “discrimination ended ages ago.” Part of the reason that I started writing in the first place is to do my part to change this unjust system that has been forced upon African-Americans. We all have a voice and I want everyone to use theirs– just in the most effective way.

Here’s where some of you guys are going to hate me. And that’s okay, just hear me out.
In my humble opinion, I think that we have to be less aggressive in the way that we come at people who aren’t familiar with the issues we face (ie- most white people). I’m not saying to condone racism, because that’s simply unacceptable. What I am saying, however, is that instead of attacking people for not knowing what it’s like to be black (because they’re not black), we move our goal to education and not just trying to “expose people’s inner racism,” when in most (not all) cases, it’s simply ignorance because of things that they just don’t have the exposure to.

Example– Sam Smith. Here’s a series he tweeted when a friend of his encountered racism in London.

Sam Smith is a white man who has had the privilege of never having to deal with racism. Ever. As a man in the music world who works with a lot of black professionals on a daily basis, should he have been more aware of issues that POC face? I think so. But, some black people attacked him on twitter for tweeting so “passively.” Some responses were sarcastic, such as “white man becomes aware that racism exists,” and other messages of that nature. Look– Sam Smith is a white man. Because of his place in society, he will never have to deal with racism, and usually, when people aren’t exposed to things that they don’t have to deal with– they’re ignorant to them. Sam Smith tweeted to his millions of followers angrily about racism, and that gets attention, which is a good thing. I can name countless incidents of white people being absolutely flabbergasted when I informed them about some of the things that I’ve had to deal with growing up. Want to know why? Because they don’t have to deal with racism! Ever! When people are so engaged in the #BlackLivesMatter movement and combating their struggles, they can often become blind to the harsh realities that are entirely too true of this nation. According to the US Census, 62% of Americans are white, which means that 62% of Americans don’t have to know a damn thing about race or race relations to live a happy life. If we want change, we have to inform our white counterparts of the issues and not just attack them when they don’t know about them because they don’t have to live through them.

If I’m being completely honest, there’s a myriad of racial issues that my black ass wasn’t even aware of until recently because I grew up in mostly white community. No one talked about them because everyone was white, so no one had to. I had white friends, white history teachers, white principals, white coaches, and white counselors, all who didn’t treat me any differently because I was black, (well, not differently enough that I could tell) and I really thought racism was a thing of the past and no one could tell me anything different. So, if a black girl in a white community didn’t know anything about racism do you really think white people are aware? Again, this is NOT FAIR. This is NOT OKAY. It’s an atrocity that we have to educate people about a problem that THEIR ANCESTORS started. It sucks, but I think it’s one of the only ways that they’re going to listen. And because of what I previously said about us living in a white nation, we have to get them to listen if we want laws to go our way and change to actually be seen. If we just attack people who don’t know better, we just look like some angry mob from their standpoint. Do I think white people should have to know about the struggles they caused? Yes. Do I think they will if we don’t tell them? No. It is not our JOB or responsibility to educate the masses. Our anger and aggression is so valid, but will it work? I want progress, and I think the route of education will make progress.

This brings me to another point. I’m sure by now we’ve all heard Macklemore’s new song, “White Privilege II.” Some people like it and some don’t. I don’t think it was meant for black people to like. I think that it was meant to reach more white minds and spark conversation in the minds of white Americans because any conscious black American already knows about what is going on and the all-too-relevant lyrics of today’s conscious black rappers, my personal favorite being Kendrick Lamar. Macklemore, as a softer rapper, hits an audience that bridges the rock, pop, and rap categories– an audience that is mostly white. Since the song came out, eight of my white friends (four who aren’t up-to-par on social issues) have asked me my opinion on it and have asked if everything stated is true. Dialogue has been provoked, people have become aware–progress is being made. It’s not much, but it’s progress nonetheless. Now, tons of people think Macklemore wants praise for standing on his soapbox and making up for the guilt he has harbored for winning a Grammy over Kendrick Lamar. Could this be true? Honestly, only Macklemore could answer that question. Regardless, I respect him for the song and his previous action in the movement to preserving black lives and black culture. It’s not just a song for him because he has been present at protests and previously active in the movement. Here’s a photo of him at a Seattle protest for Mike Brown. 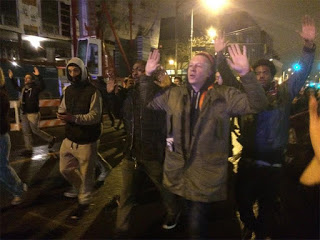 I’m not saying we have to all go out, hold hands, and sing Kumbaya. But what I am saying is that all white people aren’t out to get us and education is the priority. I know this probably wasn’t what you expected of me, so leave your opinion if you have a different viewpoint.

View all posts by acutofcrystal